What is Emotional Intelligence?

During the 1990’s , Daniel Goleman, an American psychologist, came across Salovey and Mayer’s work, he explored their research and developed a framework of five elements that define emotional intelligence and this eventually led to his book "Emotional Intelligence - Why It Can Matter More Than IQ" being published in 1995.

In his book, Goleman promoted the concept that Emotional Intelligence was more important than natural intelligence (IQ) in determining success in life and Goleman argued that it was not cognitive intelligence that guaranteed business success but actually emotional intelligence estimating that up to 80% of success is down to EI – your emotional competence – leaving just 20% attributable to IQ or knowledge and skills. He describes EI as the ability to identify, assess, and control one’s own emotions, the emotions of others, and that of groups. Goleman outlines the collection of psychological traits and skills which he says are key to success and explains how they determine people’s success at work, relationships, and their overall well-being.

He described emotionally intelligent people as those with four characteristics:

Self-Awareness – People with high emotional intelligence are usually very self-aware   . They understand their emotions, and because of this, they don't let their feelings rule them. They're confident – because they trust their intuition and don't let their emotions get out of control. They're also willing to take an honest look at themselves. They know their strengths and weaknesses, and they work on these areas so they can perform better. Many people believe that this self-awareness is the most important part of emotional intelligence.

Self-Regulation – This is the ability to control emotions   and impulses. People who self-regulate typically don't allow themselves to become too angry or jealous, and they don't make impulsive, careless decisions. They think before they act. Characteristics of self-regulation are thoughtfulness, comfort with change, integrity, and the ability to say no.

Motivation – People with a high degree of emotional intelligence are usually motivated. They're willing to defer immediate results for long-term success. They're highly productive, love a challenge, and are very effective in whatever they do.

Empathy – This is perhaps the second-most important element of emotional intelligence. Empathy   is the ability to identify with and understand the wants, needs, and viewpoints of those around you. People with empathy are good at recognizing the feelings of others, even when those feelings may not be obvious. As a result, empathetic people are usually excellent at managing relationships , listening , and relating to others. They avoid stereotyping and judging too quickly, and they live their lives in a very open, honest way.

Social Skills – It's usually easy to talk to and like people with good social skills, another sign of high emotional intelligence. Those with strong social skills are typically team players. Rather than focus on their own success first, they help others develop and shine. They can manage disputes, are excellent communicators, and are masters at building and maintaining relationships.

Benefits of a high EI

Our emotional intelligence affects the quality of our lives because it influences our behaviour and relationships. It raises our self-awareness and it enables us to live our lives with intention, purpose, and autonomy. EI can profoundly affect our choices by creating options we may not have otherwise imagined or considered to be possibilities.

Can you improve your EQ?

Goleman believes that emotional competencies are not innate talents, but rather learned capabilities that can be learned, improved and worked on to achieve outstanding performance.

It’s the foundation for dealing with impulses, dealing with stress, and actually responding and reacting in a way that you would want.

So, developing Emotional intelligence is the key to improving personal effectiveness.

As a leader or manager, developing your EQ will better improve your chance of building successful relationships with peers and team members and leading your teams to achieve business results.

So, where do you start?

You can measure your levels of Emotional intelligence using an assessment.

and provides a detailed insight into the four areas of emotional intelligences including:

highlighting Essential Traits, Desirable Traits and Traits to Avoid in each. 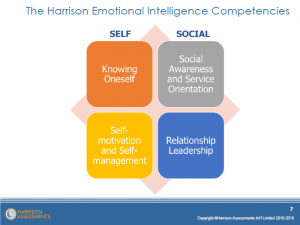 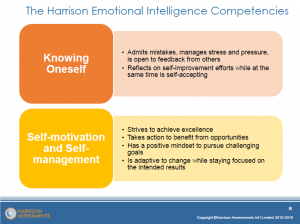 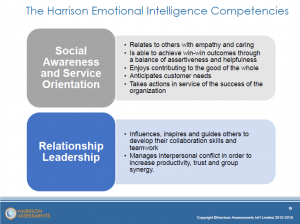 Want to explore your Emotional intelligence?

Here are several options for you

see a sample Harrison EI report. get a feel of what it looks like and decide if it’s something you would like to do for yourself.

scoring the 4 key areas of

Self -motivation and Self -Management

receive a full EI report (A one page overview and 4 detailed Individual Competency Reports providing a comprehensive understanding of an individual’s attitudes and behaviours that impact his/her level of the competency against each of the four areas. _

email Christine@utransition.co.uk to complete a 20 minute online SmartQuestionnaire™  and receive the online course

Complete a 20 minute online SmartQuestionnaire™ and receive a full personalised 19 page report (overview and Individual Competency Reports providing a comprehensive understanding  of an indiividual’s attitudes and behaviours that impact his/her level of the competency against each of the four areas.

What is Emotional Intelligence?

Tips for dealing with emotions at work