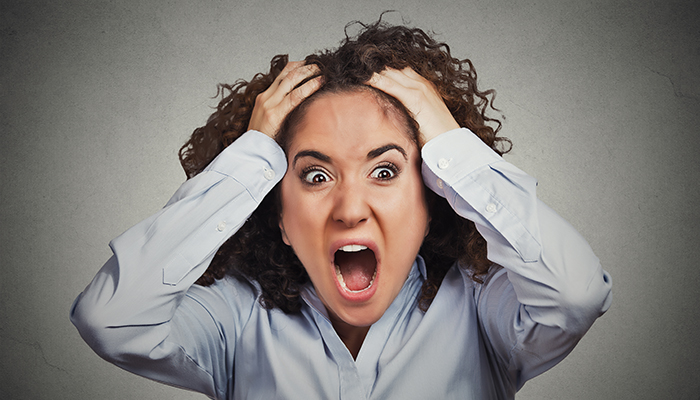 Everyone has their limits, however, some people reach them much more quickly than others. When employees are stressed, they often behave in ways that are quite unlike them under normal circumstances. They may act out in ways that are puzzling to their co-workers and make themselves literally sick with stress and pressure. Later, they may be embarrassed, attempt to build bridges, or simply turn-off or retreat. It is painful to watch. For managers and HR professionals, we are often called-upon to deal with the collateral damage and/or counsel the formerly-stressed employee to get him/her to a better place and repair damaged relationships. Or, worse, we may have to put them on warning or even terminate them for this kind of disruptive behaviour. All this effort, time and drama – who needs it and is there a better way?

Absolutely. The first thing to know is that people are stressed by different things. One employee may be stressed by having to speak publicly or interact at conferences with others too often; another might be stressed by deadlines or busy schedules; yet another by having to “serve” or be helpful to customers at the expense of their own needs. Wouldn’t it be great to know what these triggers are so that we can help people remain composed and stable, rather than spiralling out of control and going over to the dark side?

A multi-dimensional approach to considering the stress response really helps. For example, I happen to be high in Pressure Tolerance, which means that I perform best when under-the-gun; if I don’t have a challenging deadline, I tend to put off starting on a project until a deadline appears and then I feel energized to meet the target. On the other hand, I have low scores in both Manages Stress Well and Relaxed, which means that I tend to be a bit “wound” and, sad to say, easily stressed. Taken together, you might say that I am rather neurotic – I get stressed out but perform better when there is a moderate amount of stress on me because I respond well to pressure. Weird, but true – Everyone is a bit different and knowing how your employees are wired can really help you manage them better. 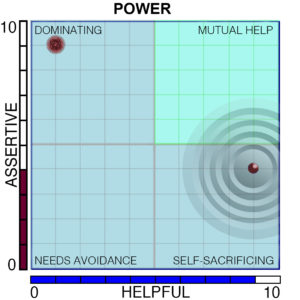 Using an assessment can then help you take the ball further down the field if it incorporates Paradox Theory, which looks at the balance/imbalance with respect to a paradoxical pair of traits. Consider Daniel’s result below on Power (left). He is very motivated by helping others get their needs met and achieve their goals (i.e. service-oriented), but he is less likely to look-after his own needs (lower score on assertiveness). Thus, becoming Dominating is his stress response (top left part of the grid). This can be confusing to his co-workers. They are used to Daniel as a very nice, helpful person and yet, Daniel may be under too much stress, which turns him into a raving lunatic because he cracks under the pressure and lashes out in less-than-attractive ways when it gets to be too much for him. Later, he feels embarrassed, exhausted and very, very sorry for his outburst.

Only where an individual has imbalanced paradoxes is a flip likely to occur. For example, for Daniel, he may have balanced and strong scores in paradoxes such as Communication, Innovation, Decision Approach, Delegation, etc. These areas are unlikely to be susceptible to “flips” because they are balanced –hence you are unlikely to see “raving lunatic” behaviour from any of these domains. Because he has the imbalance he has (from Self-sacrificing to Dominating under stress), we can predict how he will react when perceives that he has been taken advantage of one too many times – he’ll exhibit dominating behaviour and we can expect others to experience him as perhaps selfish, self-centred and uncaring when he is really stressed out. 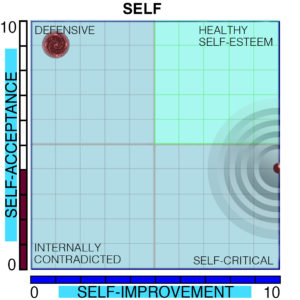 Here is another example: consider Kim’s scores on the Self quadrant. She has the highest possible score in Self-improvement and a low score in Self-acceptance. This means that when she is her normal self, she shows up as perhaps humble, self-contained, somewhat self-critical (primarily an internal state), and very interested in learning, growing and developing. When under stress, however, the “storm” shown in the top left part of the grid (right) under Defensive indicates that she can flip to the other side of the paradox and become Defensive. This can take the form of rejecting feedback, shutting down lines of communication, and generally acting out in a defensive way. Frustration builds up and has to find an outlet once the stress is unmanageable. Acting defensively can be a real problem for Kim because it means that under stress she is not likely to be able to learn, grown and develop as is her normal state.

A good assessment reports on an individual’s stress-related traits AND will depict many paradoxical combinations of traits that can give insight into the kinds of situations that will elicit a “raving lunatic” response. We can all learn how to both manage our stress better as well as balance our imbalanced paradoxes through greater self-awareness, growth and personal development.